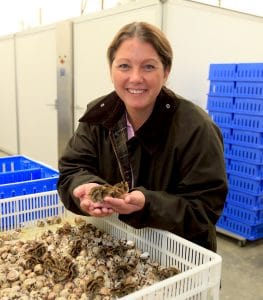 For Brittney Miller, quail farming is in her blood. Now known as the “Mother Hen” of Manchester Farms, Miller has been a part of the All-American family farm success story since she was a young girl. Miller fondly remembers walking to the quail barns with her father on their land in Sumter, SC. Growing up, Miller spent her summers working on the farm and learned the importance of honest hard work, dedication, and commitment from her passionate and entrepreneurial father.

Miller attended Clemson University and graduated with a BS in Poultry Science with an emphasis in Finance and Marketing in 1993. After college, Miller began her career above the Mason Dixon line in New Jersey where she worked in sales and product management in the Animal Health Division for American Cyanamid. After two years, Miller returned to Sumter to the family business, where she delved even deeper in Manchester Farms’ company management, focusing on retail and foodservice sales for all states west of the Mississippi. In 1999, Brittney needed a change and moved to Vail, CO, working as the assistant manager of fine dining restaurant Game Creek Club. Here, Miller eventually Miller met and married her husband, Matt Miller, and the couple had two children.

In 2005, Miller’s parents retired from Manchester Farms, and the family of four packed their bags for Columbia, SC, to officially take over the business. Coming back to her roots, Miller took ownership of the 31-year-old farm and all aspects of the company, including customer relations, new product development, finance, production, marketing, and quality improvement.

For Miller, keeping her father’s ideals and following in his footsteps are two things that she holds close to her heart. Forty years ago, her father saw the importance in raising quail without the use of antibiotics or hormones and with the best feed and good ole loving care; and now forty years later, the second generation strives for the same husbandry plan. Remaining true to the family’s original principles has rewarded Manchester Farms with decades of support from their consumers and chefs all over the country. Miller’s passion and soul lies with the farm community. As she describes it, “the folks that are in the food and beverage industry are the most giving, thankful and passionate out there.”

In her free time, Miller can be found with her husband of thirteen years and their two children. The Millers love spending time on the lake in the summer and hunting in the winter.